The Dark Part of the Forest #10 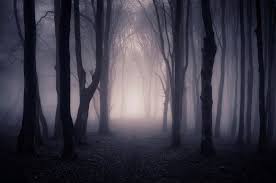 “Make yourselves comfortable. It’s storytime,” Leanna said with a smile.

“Just tell us the story without all the fancy beginnings!” Peter answered. “We only have so much time before we have to go back.”

“You know you’re here against the rules, right? I have an advantage.”

“I take that as a personal insult,” said Kathryn.

Leanna laughed. “I’ll start the story before you can think too much about it.” She cleared her throat. “It all started when I was in sixth grade. I was like every other student in the school, except for the fact that everyone else was scared of me. I have the power of suggestion, which means I can pretty much hypnotize people into doing what I wanted them to do. Not a very useful power, in my opinion. So of course, people avoided me and tried not to get me angry or do something I didn’t like. They thought I would force them to do things against their will, but I wasn’t powerful enough to do anything major. I could put thoughts into people’s heads, but I couldn’t always make them do it. It was mostly their choice.

“Anyway, I met this girl named Samantha. She was in my grade and was also feared by most. At the time I wasn’t sure what her power was. When I asked her, she got this angry, faraway look in her eyes, like she hated the world. Then she glared at me and told me she didn’t like talking about it.

” But other than that, we got along pretty well. We became friends, and I trusted her very much. Sometimes we would, during free periods, go for walks, or ‘adventures’, as she called them. We would explore the grounds or the school, and sometimes we would go into the forest, making sure to stay near the school.”

“But it’s against the rules to go into the woods!” exclaimed Erin.

“It was fun, especially with Samantha. She would make up stories about quests and such, and we would act them out. She was the best friend I ever had,” said Leanna.

“Personally, I would go by myself. It sounds better,” said Kathryn.

“Actually, I did that once. It really wasn’t the same,” Leanna said.

“Well, if I did it, it would probably be fun,” said Kathryn.

Tily laughed. “Whatever you say, your highness.” Kathryn rolled her eyes but smiled.

Marcus rolled his eyes. “Stop being such a killjoy, Peter.”

“I’m not being a killjoy, I’m just trying to get back on track!” Peter exclaimed, firing up.

Leanna raised her eyebrows at him. “I’ll continue before this escalates. Now, where was I? Oh, yes. The walks. Well, nothing much happened until winter. In December, we were knee-deep in our half-term tests. I noticed that between tests and after hours, Samantha would often disappear for a while. At first, it didn’t worry me. She had always liked going to the library, or walk around the school to ‘stretch her legs’. But then she started disappearing more often, and for longer amounts of time. I saw her very little, and then only for tests. I didn’t speak a word to her for weeks because she would disappear the moment the test was over. I never knew where she went, or what was so important that she could only focus on it. I tried to convince myself that she was studying, but I had never seen Samantha study in my life. She was morally opposed to studying.

“One evening, after dinner, I saw Samantha leave school and head for the woods. I was curious, so I followed her. I knew I had to figure out what she was doing, no matter how dangerous it was. Thinking back on it, it sounds kind of stupid, but I felt it was my duty.”

Leanna got a faraway look in her eye as if by telling the story she was reliving it. The room was silent now, everyone caught up in the tale.

“I followed her out through the snow, her footprints as my only guide. She had had enough sense to bring a lantern, so as I walked through the woods, I would sometimes see a light bobbing in the distance. I have no idea how long I walked, or how far. But it got dark soon, and I had barely made any progress. The trees blocked out any light the thin sliver moon could shed, and soon clouds covered the sky and the wind picked up. I was completely lost, save for Samantha’s lantern through the trees, and soon I could no longer see her. That’s when reality set in and I realized that I was in the woods at night without a lantern or a jacket, following a girl who had just vanished into the night. And I got really scared then. I was utterly lost.

“I decided to sit down and wait until it was light out. I figured I would only get more lost if I kept wandering all night, and maybe I could find my way back when I could see a foot in front of my face.

“So, I walked into a tree and decided it was a good enough place to spend the night. I hunkered down against the trunk and tried to go to sleep.

“I don’t know how long I sat there, too stiff with fear to sleep. But soon I saw Samantha’s lantern, bobbing through the trees, coming towards me. Then I saw her, too. She had a strange aura about her, not a visible one, but one that you could feel. It was an evil aura, one that made you want to run away in the other direction, and an aura of power. Power…”

Leanna trailed off, lost in memory.

“What happened then?” whispered Erin, afraid to break the spell. Leanna seemed to wake up from a dream.

“Samantha walked right up to me, and as I said, there was an aura about her. I would have run far away if I hadn’t been freezing cold and tired. Her eyes had dark streaks under them, but they had a wild look. Wordlessly, she held out her hand to me, and I took it, shaking with fright. She led me through the forest, walking on and on, never stopping to look back. She seemed to know exactly where she was going. She led me deep into the forest. I could see a faint, glowing light through the trees ahead. The light wasn’t warm like the sun, it was whitish and almost ghostlike. It got brighter as we approached until the forest was nearly as bright as day, though there was no apparent source for the light. Then we stepped into a clearing, and it went dark again. The light surrounded us but somehow didn’t, or maybe couldn’t, touch the clearing. Even her lantern, which gave off some light, seemed muffled.

“Here Samantha stopped. She gave a strange, unearthly call, and from the surrounding forest came a rustling noise. Into the clearing came all manner of forest animals. But they weren’t really alive. Their eyes were dead, their movements stiff, their faces blank. Then they all turned their faces skyward and repeated her call.” Leanna shivered, remembering. “It was the most terrifying sound I’ve ever heard. Samantha turned to me and said, ‘I have made an army. You can command them. We will take over the school. Together, we can rule. We can make the magical world ours. Do you agree?’

“I tried to back up, but those horrible animals stopped me. I was terrified, more than I have ever been in my entire life. I think it all just came back to me, the fear and the confusion and the exhaustion, and I fainted. But just before I did I sent a suggestion towards the school, and that was to come to the forest.

“When I woke up, I was back at school. Supposedly some people had been woken up by the call and had heard my suggestion. I don’t know how they found us, or what happened in the forest. Samantha was, of course, expelled, and it’s a miracle I wasn’t, too. And that’s it.”

No one moved. They were all sitting, stunned, processing what they had just heard. Peter broke the spell when he went to where Leanna sat and embraced her.

“I’m sorry,” he whispered in her ear. Leanna mussed up his hair. “It was good for me to tell someone,” she said, her voice hoarse. She got up to get some water.

“That was…” said Kathryn.

“I’ve never heard anything like it before,” said Marcus.

Erin stood up shakily but went purposefully over to the curtains.

“The curtains were moving unnaturally during the story.” She pushed them back but found nothing. She put her hand forward, feeling around the air. Then her hand touched something (it was Ximen’s shoulder, but she didn’t know that). Before he could move, she grabbed him.

“It seems we’re not alone.” Everyone turned to look at her, standing there with her hand in the air like a madwoman. At that moment, Ximen went visible again. Tily gasped, Kathryn shrieked, Peter stumbled backward. Ximen’s face flashed with fear, then he smiled.

“Thanks for the story.” With a loud crack, he disappeared.